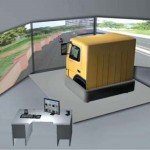 With the increasing number of road accidents and fatalities in India, the role of drivers and their mistakes leading to accidents has come increasingly under scrutiny. According to a report prepared by the Ministry of Road Transport and Highways, about 78% of road accidents in India happen due to drivers’ errors. Hence, imparting quality training to drivers is of prime importance. Driving schools in India are increasingly using driving simulators as a part of their training programme for prospective drivers. The simulators provide many advantages over traditional training as only an instruction vehicle and an instructor are used in the process. Driving simulators expose trainee drivers to a variety of traffic situations in a short period of time. This makes the training more intense and productive, offering trainees a number of educational lessons during a short period.

Driving simulation is a technique which uses a computer software and appropriate hardware to simulate within a virtual environment the process of driving a motor vehicle. Using a set of controls such as a steering wheel, brake pedal, accelerator pedal and gears, the user interacts with a simulated vehicle and manoeuvres it in real-time. As the training on a simulator is being conducted in a virtual environment, the driving simulator can do tasks which are not possible in the real world.

Comparatively, training with vehicles in real-life traffic gives considerably fewer educational moments. Another advantage is the feedback, such as visual feedback, it offers to the trainee driver and the instructor which is an essential part of any learning. E.g. if the driver swerves and goes off the proper path, the instructor can point this out in real-time and project a straight line onto the display to correct him. On many simulators, the trainee’s performance on the simulator can also be recorded from different points of view, such as from another road user’s point of view or from a bird’s eye view, and played back later to show the trainee the mistakes he/she has made. Simulators also offer the possibility of repeatedly exposing the trainee to a traffic situation which needs to be tackled like reversing a vehicle and parking it into a parking slot in a parking lot, or merging into highway traffic. This situation can be stage-managed repeatedly in a simulator which cannot be done with real-life training on the road.

Another aspect is that with traditional training the assessment of a trainee is the subjective opinion of the instructor, whereas in a simulator the software offers a uniform, objective assessment with the criteria used for assessment being clear, accurate and transparent. One of the most important advantages a simulator based training offers the trainees is a safe environment to practice driving without the fear of being involved in accidents. Echoing this, Amit Sharma, head of the Maruti Driving School at a Sai Service Station in Mumbai, says, “The novice driver often has a fear of hitting other vehicles and pedestrians while driving. But since there is no actual traffic involved in simulators, he can train on using the various controls like clutch, accelerator, brake and steering without this fear and in a very peaceful frame of mind. Even when the driver hits a vehicle or pedestrian, it is in the virtual world. These mistakes are immediately detected by the simulator software and the trainer can then correct these mistakes in the future training sessions. With simulators, the trainees become familiar with the driving controls of the car before they actually go on the road and drive. They learn to change gears, accelerate and brake before going on the road for practical training. They are also trained in the coordination that is required during manoeuvres such as changing gears, changing lanes and overtaking. This puts the driver at a big advantage. Now he or she has to only learn how to get used to the real-life traffic on the road. More than half of the training is already done on the simulator by the time the driver goes on to train on the actual vehicle.”

“With simulators, the trainees become familiar with the driving controls of the car before they actually go on the road and drive…More than half of the training is already done on the simulator by the time the driver goes on to train on the actual vehicle.”

Shantanu Gupta, Managing Director, Tecknotrove (P) Ltd (a Mumbai based company which makes simulators in India) says, “With simulators the driving schools can now train drivers on a variety of terrains like cities, highways, hills and under different environmental conditions like day, night, rain, fog, snow without having to leave the classroom which is not possible in traditional real life and behind the wheel training. Also, getting trained on a state-of-the-art simulator engages drivers interactively helping them to practice, retain and apply what they have learned. Tecknotrove believes that we can make Indian roads the safest in the world by inculcating concepts of road safety as a personal responsibility of every driver. With driving simulators, we are improving the standards of driver training and road safety education in India.”

Investing in simulators pays off in the long run. Says Gupta, “Our customers include Maruti Driving Schools (MDS), Transport Authorities, road safety institutes like IRTE (Institute of Road Traffic Education), IDTR (Institute of Driving Training & Research), NATRIP (National Automotive Testing and R&D Infrastructure Project) and many other local driving schools in India. From our customers’ experience, we know that with TecknoSim Driving Simulators, driving schools not only recover their money invested on the simulator within six to eight months of installation, but their revenues too are much higher than the average driving schools and training institutes. Simulators provide standardised training and also give the advantage of a 24×7 operation with less requirement of manpower. Driver training centres are able to train more number of drivers in the same time and also incur lesser training costs than normal schools. Simulators make the entire learning process an enjoyable experience.”

“From our customers’ experience, we know that with TecknoSIM Driving Simulators, driving schools not only recover their money invested on the simulator within six to eight months of installation, but their revenues too are much high er than the average driving schools and training institutes.”- Shantanu Gupta.

Simulators are of various kinds. High end simulators give the trainee a very realistic experience of driving with a complete car, often mounted on a moving base that can be moved in all directions giving the driver a 360 degree vision of the road. This also gives a very life-like imitation of actions such as accelerating, going around sharp bends and braking. At the lower end, the simulators consist of one PC, one screen and a steering wheel. Gupta informs, “Training of drivers is mostly done on still platform systems with non-motion simulators. For advanced training and skill development, high-fidelity or motion platform simulators become really important.”

An issue that arises with drivers being trained on a simulator is the Simulator Adaptation Syndrome (SAS). The main cause of Simulator Adaptation Syndrome is the delay between the driver’s command and the response of the simulator. The greater the deviation of the simulator response from that of a real car or vehicle, greater is what is known as the “adaptation burden” on the brain. In large deviations, the drivers may experience motion sickness, headaches and disorientation. The “adaptation” in SAS relates to the brain accepting these simulators’ disparities relative to a real vehicle and slowly changing its reference point to that of the simulation. Gupta is of the opinion that the effects of SAS can be reduced “by minimizing the simulator’s system delays and rendering all the cues economically possible”. He says, “We have no such complaints so far, as we have carefully rendered the images of our simulators at a speed of 60 FMS making it close to reality.” 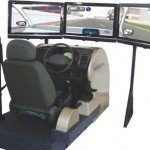 Tecknotrove focuses on five parameters while training drivers on its TecknoSIM Simulators: hazard perception, dangers of drinking and driving, knowledge of traffic rules, basic driving skills and eco driving. Hazard Perception is an interactive drive aimed at familiarising the drivers with the most common crashes involving young people. By establishing what hazards are, how to anticipate them and strategies to avoid them, the trainees gain valuable knowledge, developing an attitude of safe driving. TecknoSIM’s Alcohol impaired glasses enable the drivers to see the consequences of drinking and driving, but under completely safe conditions of a simulator. They are also given an opportunity to drive the simulator while using mobile phones to see the consequences of using mobile phones while driving. The Eco Driving module teaches the best driving practices to minimise the consumption of fuel and reduce the expense of driving. Using this module, the companies can reduce their expenses and fuel consumption by at least 15%.

With the pressing need for improving road safety and reducing accidents in the country, the future for driving simulators looks promising. Says Gupta, “The market for driver training simulators is now rolling. Having realised the cost benefit of using simulators for training and testing, major vehicle manufacturers/ OEMS are now actively setting up training institutes using driving simulators. The cost of setting up simulators based training institutes is quite low as there is no requirement of huge land and the training value is much higher. Simulator based training is now increasingly being adapted by fleet owners, logistic companies, car rental companies and local driving schools. We have over 450 successful installations and satisfied customers across India and in countries like Indonesia, Nigeria, UAE and Bangladesh.” 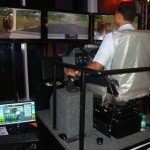 The TecknoSIM line of simulators from Tecknotrove are highly realistic replicas of the actual vehicles and are equipped with fully functional simulated instruments and controls. The replicated cab is mounted on a still or motion platform with a high-resolution display system and surround sound. Placed next to the simulator is an Instructor Operator Station that controls all the aspects of training and evaluation including setting scenarios, time of day and weather condition. Tecknotrove offers simulators for cars, trucks and buses. Tecknosim Car Simulators come in three variants. TecknoSIM Desktop is a Smart Driving Simulator based on a gaming console, and is typically used for training groups of drivers because of the low cost of the hardware and high training value. TecknoSIM DS is an intermediate level Simulator, and has an inbuilt instructor that trains the driver right from understanding the vehicle controls such as the steering wheel, gears, brakes, clutch and biting point, to driving skills like merging with traffic on city roads. TecknoSIM C180, is an advanced driving simulator that trains and tests licensed car drivers in defensive driving and fuel efficiency. It also trains drivers in advanced skills such as driving at night, during fog and on hills and highways.

The TecknoSIM T180 Truck Driving Simulator trains drivers of heavy vehicles such as trucks, trailers and tankers in safe driving Skills. More than 10,000 heavy vehicle drivers have been trained and tested on the T180, an important part of the course being training in fuel efficiency, enabling employers to make significant savings on their fuel bills. The T180 also comes in three options, with all of them giving a realistic representation of traffic noise, engine and the ambient environment. Tecknotrove also provides simulators for training bus and motorcycle drivers.

Login to Tecknotrove
Reset Password
Enter the username or e-mail you used in your profile. A password reset link will be sent to you by email.